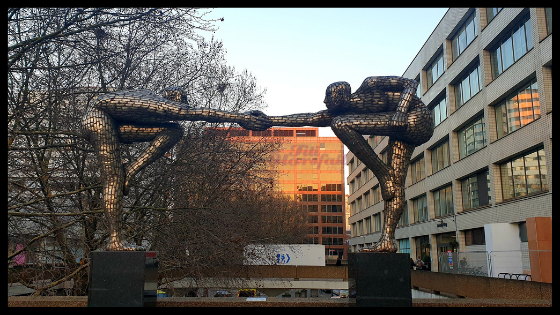 I walked passed this statue in London and was struck by the sheer sense of caution it evoked. Caution as to who one should reach out to, give a handshake or bring into a close circle. Then there was this stark realisation that both individuals were mirroring each other. The other person is also treading with caution. Once bitten, twice shy! This would serve for character profiling in a nice, warm toe-curling story.

There is an African adage that says ‘it is people that make people get spoilt.’ People have learnt that distrust is a safety net to put in place until proven wrong or the negative perception is dispelled. Who would make the first move of opening up his or her arms for an embrace and not feel violated or threatened if another comes to share a space. Who would not read negative meanings to every innocent action another has taken. Who would be outright in taking down his or her mask and feel comfortable in their vulnerability. Notice, that as long as their hands are stretched out in that handshake of caution, fear is imminent! Their heads are not raised up. They cannot look around them and live in the moment.

So many potential friendships were not let to grow because of past hurts and prejudices. Relationships built on love, were never enough because the baggage of the past always haunted and unforgiveness was a stronger vice than contemplated.

Staring at this statue, I was confounded with our modern realities of building relationships with caution. The cycle can go on endlessly. Let’s make deliberate effort to do something nice for someone every day or whenever we have the opportunity to; a warm greeting, a nod of acknowledgement and then, that handshake of common solidarity.