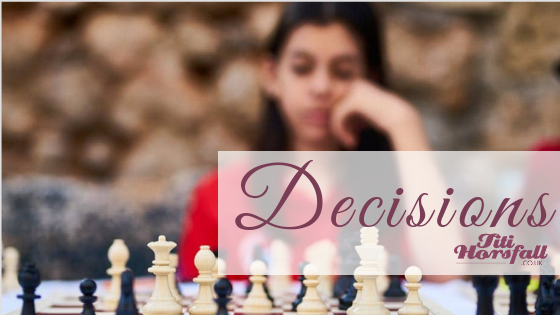 Before you take that decision, think again and think through. Put it through a test. Would it fit into your value system and your dreams?

We all make decisions on a daily basis. Mine for instance usually falls within the field of family, work and my writing.

A few years ago, I took a decision that was life-altering, for the sake of family and its wellness. I was on a constant go until all was certain. Years after, I re-evaluated and realised that in taking that decision, I had changed. That audacity to push through brought with it courage and a changed persona.

Every decision we commit to in life takes a bit of us as well and alters us positively or negatively beyond the immediate outcome. The outcome – failure or success – impacts also. Inherent for the outcome, is the ability to take risks or shy away from them.

The biggest decision Esther took was not in going before the king to secure the lives of her people. Her most critical and life-changing decision was accepting to go into the palace in the first place. She went in to compete with other maidens of the land, for the love of the king. She stood amidst a considerable number of equally beautiful maidens. What were the chances that the king whose favour they sought would find her irresistibly beautiful to make her his queen? She would have weighed her options with scores of what ifs?

What if he stripped her of her innocence and banished her to his harem? If that was a scenario worth considering, the implication was that she would never return home nor would she be queen. She took her decision, went in, and as history proves, she became a changed person.

It was this decision taken, that formed the bedrock of her subsequent decisions. This initial decision affected her personality and propelled her to take the decision to go into the king’s throne room having not received an initial invitation.

Be ready for the changes that would be manifested in you – character, life’s view, mind-set or opportunities that come with each decision taken.

In decision making, particularly those which would have great impact on lives, walk with some guiding lamp posts: