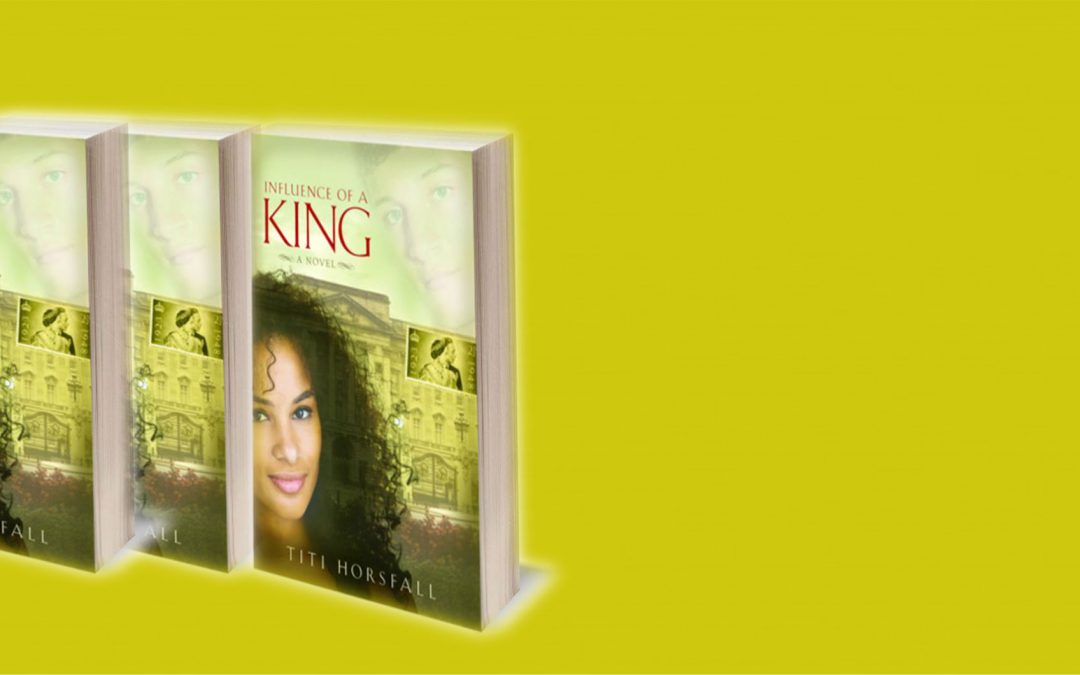 Titi Horsfall’s fictional narrative, Influence of a King (Deep River Books, Oregon, U.S.; 2015), her second after From an Orphan to a Queen Esther, is the unusual story of two young hearts born in far-flung places, but who would find anchor at a time of momentous world crisis. It is the story of Nigerian’s Kanyam and English boy Chad, also of Nigerian roots, whom fate brings together in the most unusual circumstances and how they find undying love.

But their love rides on the back of a tempest; it is love set against the horrendous backdrop of World War II, with Nigeria still in the throes of colonial rule. How did this magical love happen between the two? How did the path of a poor, Nigerian village girl cross that of an affluent English boy to produce a romance that can only be dreamed of?

This is Horsfall’s masterly narrative that weaves 20th-century historical events into the lives of the twosome at a period of uncertainty plaguing the world. Kanyam, born in the creeks of the troubled Niger Delta, suffers persecution and rejection from her own people because of how she looks. She is beautiful beyond words and is regarded as descending from the gods, but a source of unease in the community.

What is worse, she is not the anticipated son her parents expected; she causes her father the loss of his inheritance. Her mother loathes her for it. She is alone in the world except her father whose love for his daughter suffers occasional bouts of laughter and sadness. She is packed off to a mission school at that remote time to escape discrimination from her own people.
Indeed, Kanyam suffers as a girl-child for no fault of hers. Her mother takes her to a house of healing where she is inflicted with all manner of madness peculiar to such houses of horror in the name of exorcism. However, the education she acquires at the mission with Sister Martha and the others eventually redeems her from persecution; it is what would catapult her to her place of destiny and in the arm of love.

On the other hand, Chad is born to a Jewish mother from a wealthy family and a black father. But his mother’s wealthy background becomes the all-important factor that gives him his English identity. It is the period of the 1930s and the world is on the boil; the Great Depression of the 1930s is on in America and the world has just woken to the reality of Hitler’s quest for world domination. Chad is forced to play his part to save his country from annihilation. He joins the British Navy much to his mother’s sorrow and protestation. Her efforts to match-make him with a Jewish girl, Brina, before he goes to war, with the sole aim that he has a child, her grandchild, fails.

Chad goes to war at sea aboard the Royal Navy Ship, Destroyer I, and makes an instant impression. While on a mission to retrieve an important object, the Green Baltic, from a cargo ship under attack, he is attacked by a shark and is wounded and loses consciousness until Kanyam’s father drags him ashore in his net in the open sea.

That is how he encounters beautiful Kanyam; she becomes his nurse. When he recovers his strength and sense of bearing, he returns to England through Kari and Port Harcourt. But before he leaves Kanyam’s village, an incident of momentous proportion happens. At a village maiden dance staged in his honour for staying among them for a year turns out a match-making one and he instinctively reaches for Kanyam. Embarrassed, Kanyam is deeply troubled by it and refuses to see him before he leaves for England.
Chad, however, returns to Nigeria as head of a commission of enquiry on some military matters regarding the English officers operating in the Delta region who illegally acquire land and displace Kanyam’s Oputo people, with Kanyam’s uncle, Donga as the arrowhead in his quest to displace his brother, Kanyam’s father, Adoki, from Oputo leadership. Through some quirky events, Chad’s second encounter with Kanyam isn’t pleasant as a Resident Officer, Auckley Garner’s designs on her leaves her vulnerable. After the inquiry, Chad returns to England bitterly disappointed that Kanyam has so easily forgotten him after the failed episode at Oputo during the maiden dance. Sadly, he does not give Kanyam a chance to explain her side of the story.

BUT it is as if the God, which Kanyam and Chad worship, has had their path ordered for them from the beginning of time, as two youngsters seem destined for each other. In spite of this apparent miscalculation on the part of Chad that seems to have put a permanent wedge between them, Kanyam gets a scholarship to study at a university in Scotland. Towards the close of her programme, Chad walks into Kanyam, almost mysteriously, at a lawn while England mourns the death of her king.

Indeed, Kanyam and Chad seem fated to meet aided on by their faith in God, as they keep their hearts open to His direction. Horsfall weaves a Christian religious metaphor into unforgettable narrative that links two lives in far-flung places to connect in an unusual way. In Kanyam, Horsfall has created a charming character through whom she portrays the plight of the African girl-child and woman. Although patriarchy is the usual blight of the African woman, Horsfall goes beyond the usual and highlights the life of a young woman whose beauty and uncanny resemblance to her paternal grandmother set her on a collision course with her townsfolk, including her own mother who sees her own daughter as the source of her husband’s disinheritance.

But through her also, the local people of Oputo see the benefit of educating the girl-child; through Kanyam, Oputo gets a lawyer to fight on its behalf as British officers threaten to confiscate their land for oil exploration, with the result that war and unrest ensued. Kanyam’s early education, through her father’s foresight, would set precedence for the future in the immense benefits of girl-child education.
Influence of a King is an ambitious, adventurous novel; a narrative of colonial history, World War II, a lost African grandson accidentally finding his roots, a girl who is an outcast and the uncommon love divinely ordained between them, in an improbable time and space. It is also, and deeply, a story of God’s hand in the affairs of men and how He directs them within the compass of His own making, especially when such men and women align with His divine will; only God’s influence could have brought Kanyam and Chad together in Nigeria and later in London to culminate in marriage.

Horsfall’s novel reads with breathless ease. The range of her subject is glorious and the verisimilitude created is stunning, which is deftly resolved to give this novel a marvelous glow. This is fiction at its heartwarming best.